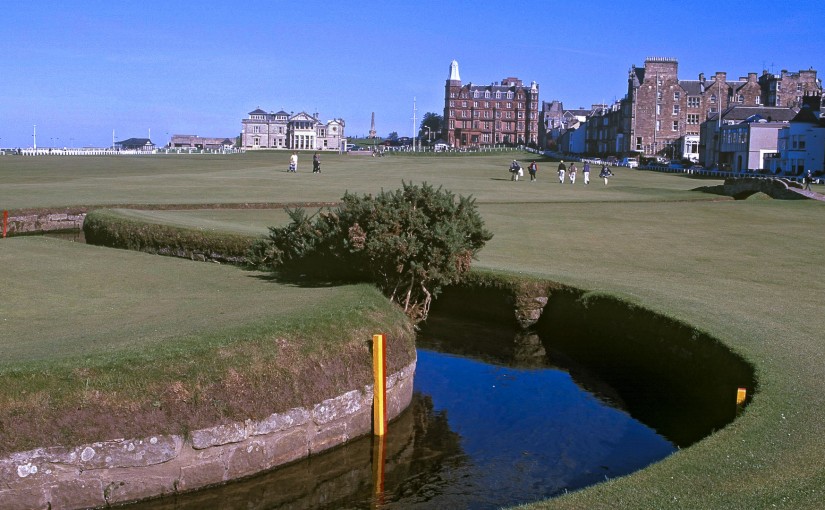 Last weekend I spent a wonderful day in St. Andrews, the town referred to the world over as ‘the home of golf’.

St. Andrews to me is a magical place, where the greats of the game have walked the famous links for generations.

My family name is Morris, and I have always believed – though so far have no evidence to support it – that Old Tom Morris, one of the forefathers of The Open Championship is my ancestor.

The magnificent golf museum, across the road from the clubhouse is a must for anyone interested in the history of the game. We had afternoon tea in the rooftop cafe which looks out over the Old Course and the links beyond. We watched groups of golfers having their picture taken on the famous Swilcan Bridge, before ‘hearing the roar of the crowd’ as they walked up the 18th fairway.

My late father was an enthusiastic golfer. What he lacked in talent he made up for in perseverance and spirit. The Open was a TV highlight in our household. He watched in awe every year as the swashbuckling, glamorous American players took the game to new heights. Jack Nicklaus was his hero. By the time I started to understand what it was all about Tom Watson was the man of the moment. You can’t share the same hero as your dad, so Tom Watson was mine.

Over the years we went to all the Open Championships that were hosted in Scotland. Carnoustie in Angus; Muirfield, in East Lothian, near Edinburgh; Turnberry and Troon on the Ayrshire Coast (where I was born and raised) and of course St. Andrews. Tom Watson won at all of them, apart from, sadly, St. Andrews. I kept cuttings of all his victories in a scrapbook which later ended up in a suitcase in my parent’s attic.

Many years later in 2009, my sister and I were selling the family home and I found the scrapbook in the suitcase, slightly dusty but still intact. Tom had made something of a miraculous comeback that year, nearly winning The Open again at Turnberry 26 years after his last victory, but in the end it was not to be. Prompted by my find, I decided to send an email to his management company passing on my commiserations and mentioned that I had just found the old scrapbook. To my amazement I received an email back thanking me for my kind words and asking if I would like to meet Tom at St. Andrews the following July, as he was keen to see my ‘work’

We met at the clubhouse on the eve of the tournament – in fact he called himself in the morning to confirm a time – We chatted about his career, his Scottish ancestry, my imagined connection to old Tom Morris, and what a wonderful place he thought Scotland and its people were. I gave him the scrapbook which he seemed touched by.

They say you should never meet your heroes, as they always disappoint. Not if your hero is Tom Watson and not if the meeting place is the ‘home of golf ‘.