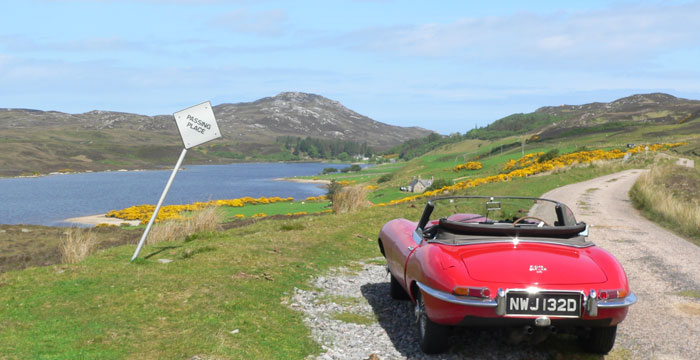 The mainstream media has been full of coverage for domestic tourism recently, for obvious reasons. I can’t help noticing that all too often articles are accompanied by phrases such as “resign yourself” to UK holidaying or “settle for” a staycation. Forgive me if that jars a little.

I grew up on the outskirts of London, but my Dad hailed originally from the west coast of Scotland. Every year during my childhood we’d make the long – and in those days quite tortuous – journey north for our summer break. I’d usually mark the start of the trip – as well as my white blouse – by throwing up in the back of the car before we’d even reached the start of the M1. Somehow that got it out of my system. The next fortnight would then glide by without repeat incident, despite roads twisting and turning their way past Loch Lomond, over the Rest and Be Thankful Pass into Argyll then down, around and back up the Kintyre peninsula.

The greatest road drama came from humpback bridges, remnants of Victorian days and old drove routes. Dad took delight in accelerating towards and over them so that my stomach somersaulted as all four wheels on our gold Cortina momentarily lost contact with the tarmac. Usually it was a jolly jape, accompanied by my shrieking laughter and chiding from Mum. Once it nearly went badly awry – Dad not taking into account that he had extra passengers onboard, flinging us kids sat-in-the-back-on-adult-laps with a bang and loud yelps into the vinyl roof. Regulations were much more lax back then.

I have vivid and fond memories of long summer days on the beach, building sandcastles, collecting shells and star-jumping the waves in my little red swimsuit, its white overskirt flapping up in the air, as if pulled on invisible strings by my outstretched arms. I usually had to be dragged away in time for high tea and bed, desperate to eke longer from my fun in the sun. I don’t recall rain putting a dampener on things, though I still have images in my mind of waterfalls thundering down hillsides, so I can’t pretend it was always warm and dry.

I’d return to school full of stories: the day out by boat to the Isle of Gigha with its exotic gardens and the most flavoursome strawberries or the expedition to Davaar Island on foot at low-tide to see the mysterious painting of the crucifixion in a cave. That day I learnt that adults don’t always know best – bemused at Mum struggling to clamber along the rocky shoreline in highly inappropriate court shoes.

On occasion Dad felt the need to justify that our trip back to Scotland cost just as much as my school friends’ package holidays to the likes of Majorca. Yet the thought that I was hard-done-by never entered my head.

Now we have our own home on the Kintyre peninsula. Over the last few weeks I’ve felt very close to the drama of the coast, and the ever-changing scene. One evening the waves lap gently on the shore, a soothing calm broken only by the flapping wings of ascending cormorants and the shrill cries of terns and oyster-catchers.

By the next, a different wind direction and heavy skies mean crashing waves, foaming at our feet, seaweed ripped out and piled high, gannets and gulls blown inland, struggling not to veer too far from their ocean course.

In the 17 years since Robert and I started McKinlay Kidd, we’ve enjoyed experiences “at home” to rival anything on “exotic” foreign trips. We didn’t “resign ourselves to” a hot tub under the stars one chill February evening, nor spotting killer whales from a boat off the shores of the Isle of Mull.

We certainly didn’t “settle for” a rail journey into the wilderness of Rannoch Moor or driving classic cars along twisty single track roads with only sheep and boggy verges to avoid.

Eating lobster fresh from the creel by the seashore and clambering over ruined castles weren’t “fallback options”. Here we’ve gazed in wonder at standing stones as ancient as the pyramids and strolled empty beaches of white sand and turquoise waters rivalling anything the Caribbean has to offer.

A trip around the UK also invites you to delve deeper into history way beyond those long-forgotten classroom talks; to uncover all the varied facets of our culture, the melting-pot legacy of Gaels, Celts, Vikings, Picts, Romans, Normans, Anglo-Saxons brought into the modern era by influences from around the globe –European, Asian, African, Indian, American and more.

Many of our customers at McKinlay Kidd make holidaying in the UK and Ireland their first choice; for others, it is normally a core part of their repertoire alongside long haul journeys and jaunts to the sun.

So instead of pining to travel the earth, let’s pause a while and soak-up the riches of the world on our doorstep, celebrating the UK as our number one destination.

Just remember to slow down for those occasional humpback bridges – a few of them still exist if you only know where to look.

2 thoughts on “Don’t ‘just settle’ for a UK holiday”