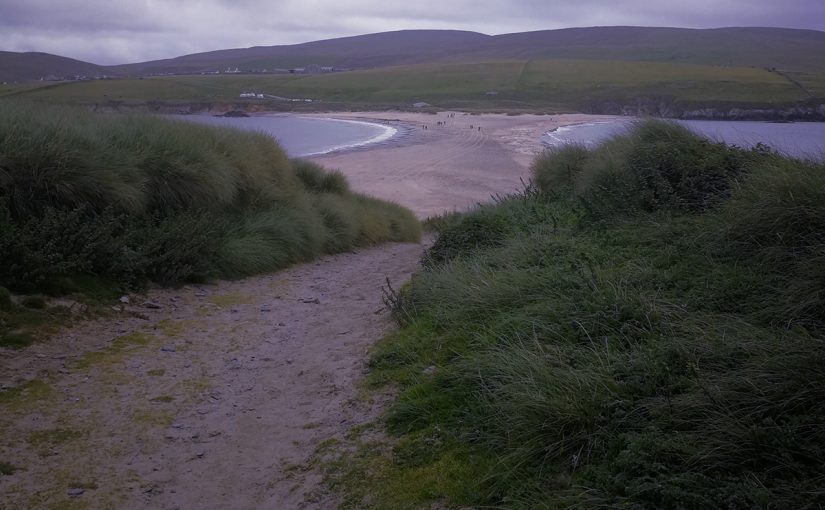 Having spent the majority of my adult life living in a city I found Shetland to be one of the most spectacular places I have ever visited. The shockingly beautiful and dramatic scenery really caught me by surprise and I must say that one of the highlights of my trip was St. Ninian’s Isle. I loved the contrast of a golden sandy tombolo beach followed by high jagged cliffs leading into the ocean.

After a day of exploring the north of the Shetland mainland we decided to make our way south while the weather and daylight were still on our side. As we were driving through the tiny roads of Bigton we turned a corner and all of a sudden saw this stunning view appear out of nowhere in front of us. We parked the car and made our way down to the beach. As we walked across it was amazing not only how green the water was but also how on either side of the tombolo the colours looked completely different. We continued across the beach and up the little the hill to reveal a sheer drop on the far side. One minute we could have been on a tropical beach and the next we were watching the waves crash against the jagged cliffs: it felt like we were at the edge of the world. We spent a while exploring the area whilst soaking up the fresh, salty air and enjoying the peace and quiet of our remote surroundings. 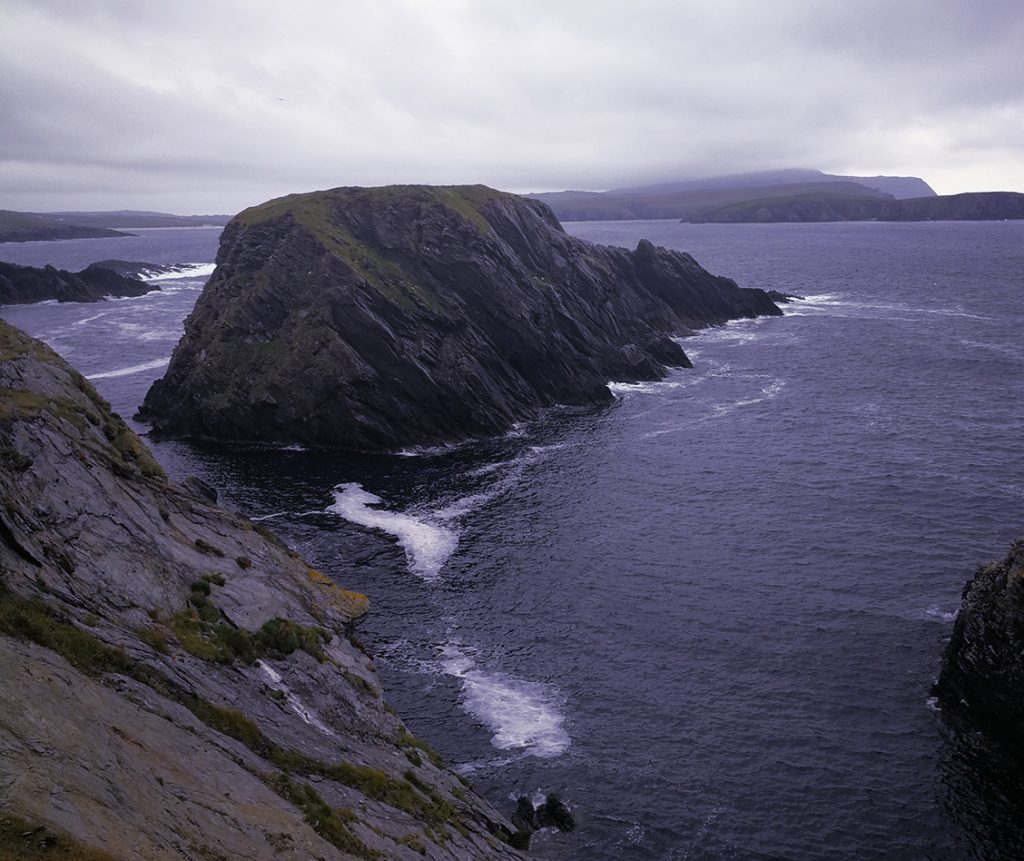 Shetland in general seems to have an amazing relaxing quality about it. For my entire time there I was able to unwind and let the stresses of day to day life simply melt away. It’s a wonderful feeling to have brought home from this trip.

Daniela explored Orkney and Shetland on a recent trip to get to know the island – our brand-new Complete Orkney & Shetland holiday can help you do the same thing. Get in touch and we will be delighted to arrange your Scottish island holiday. 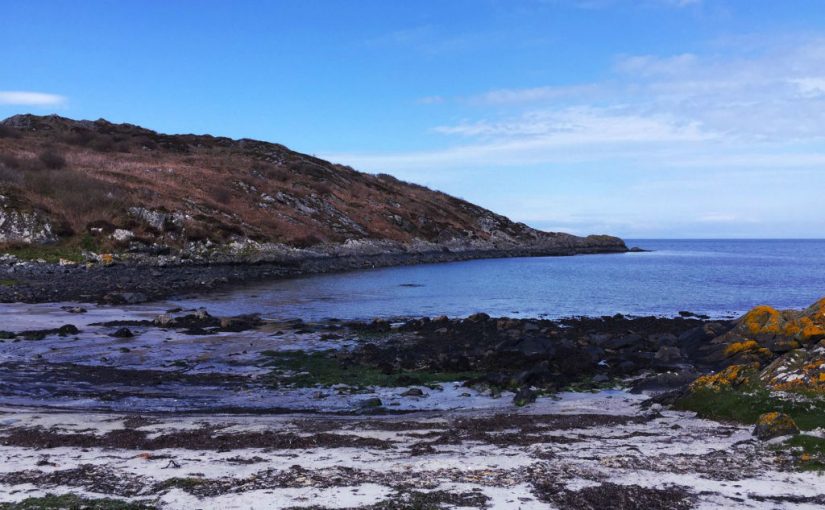 I recently set off from the bustling city centre of Glasgow on a gloriously sunny Saturday afternoon to enjoy a relaxing bank holiday weekend and experience island life on the Isle of Gigha. 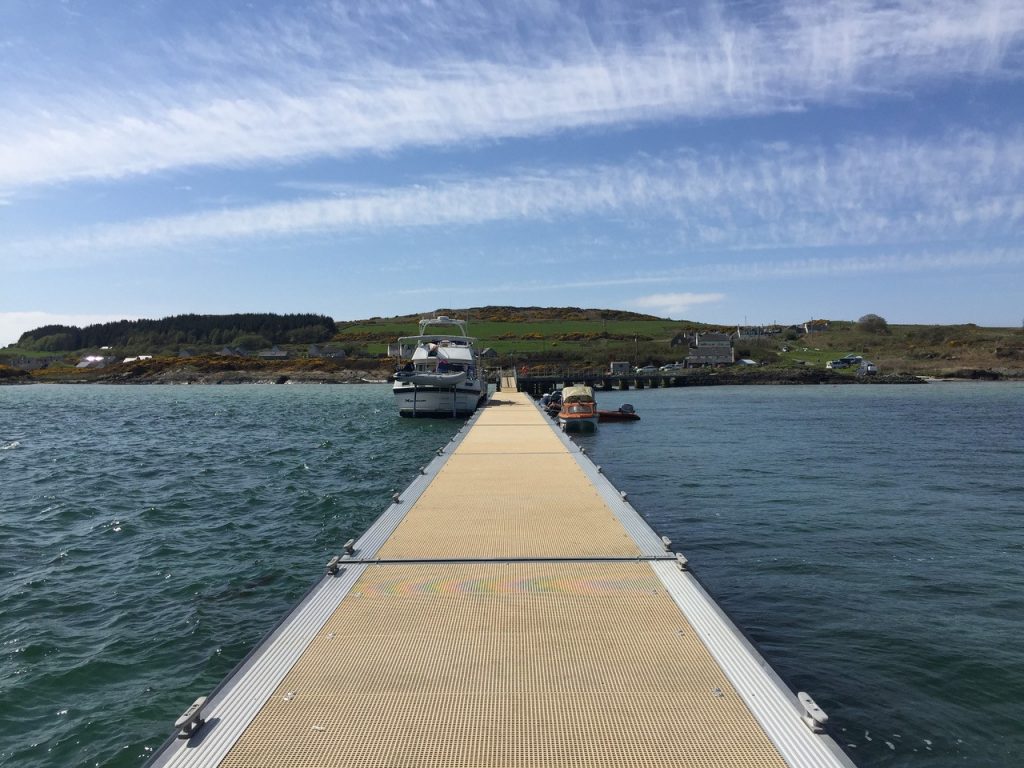 Even the drive to the ferry port was spectacular. By the time I hit Loch Lomond, the weather had turned in true Scottish fashion. The majestic scenery was blanketed in a layer of stunning low cloud, turning the journey into a beautiful and dramatic drive! I travelled on through picturesque towns, such as Tarbet and Arrochar, before reaching my personal favourite, Inverary.  With a ferry to catch I tore myself away from the stunning spot, making plans to visit properly on the return trip.

As I made my way towards Tayinloan ferry port the sun broke back through the clouds. I pulled in with enough time to enjoy a quick bite to eat and a refreshing beverage from the family-run cafe close to the dock. I wandered down the pier and was greeted by a white sandy beach with crystal clear water. The view had me almost believing that I was on an exotic island in the Caribbean!

The ferry journey takes around 20 minutes and once disembarking, my hotel for the next two nights was a short two-minute drive from the port.  After a simple check in, I went upstairs to my large double room to the front of the hotel, which had breath-taking views over the Sound of Gigha. That evening I enjoyed a delicious dinner including some locally caught seafood, and made my way to the bar for a night cap and to get to know some of the Gigha locals. However, tonight called for an early night as I prepared to explore the next day. 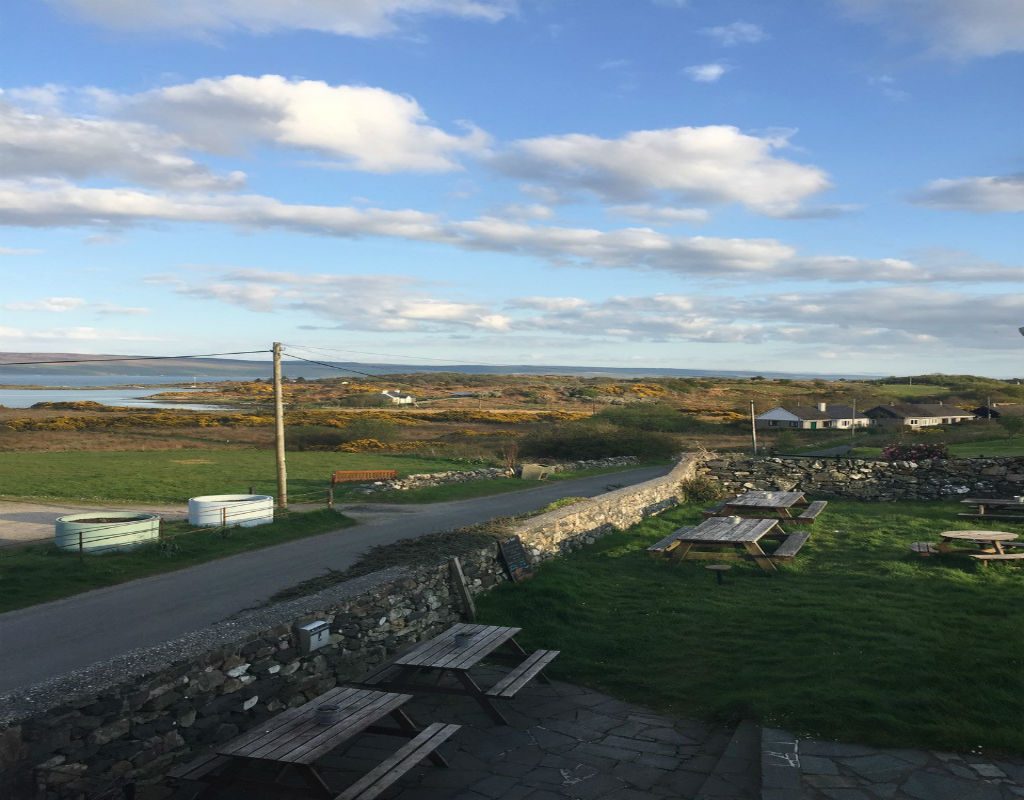 I awoke to another glorious day and tucked into a hearty full Scottish breakfast. I then drove to the South Pier at the southernmost point of the island, where there are some beautiful secluded beaches and more stunning views of mainland Scotland across the water. 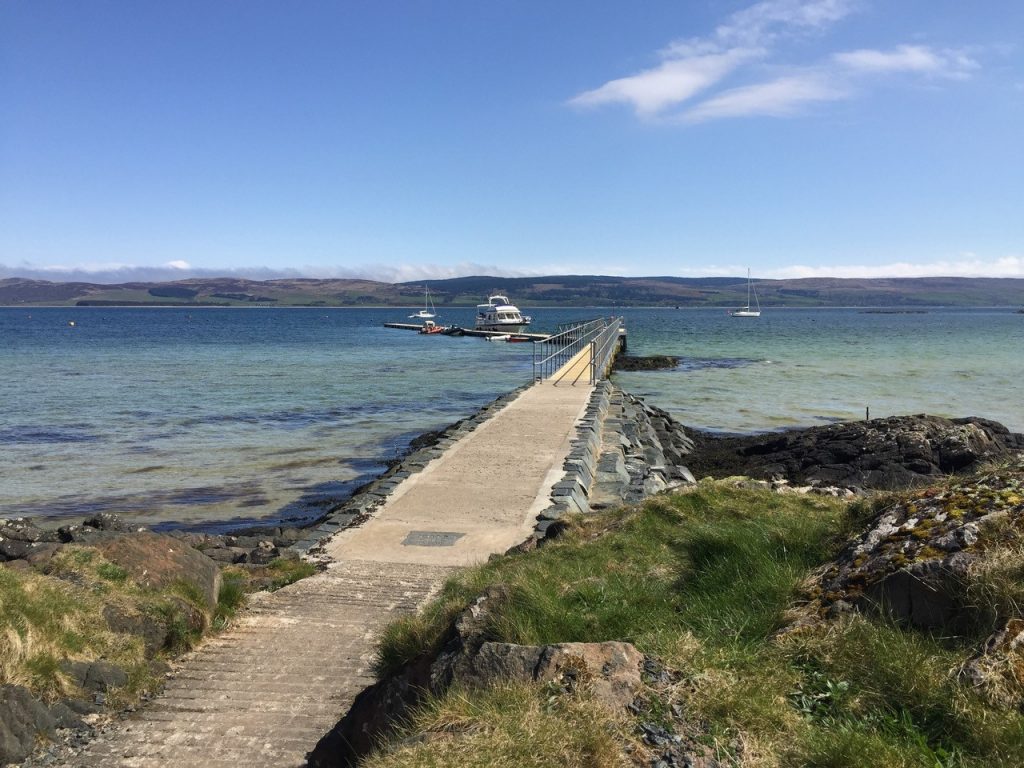 Along the way I stopped off at the spectacular Achamore Gardens. These 54-acre gardens host many notable and unusual plants and trees from around the world. Then I continued to the north of the island, and the small bay with its twin apple-core beaches and views out west to the isles of Jura and Islay.

By the late afternoon I had worked up an appetite so made my way to my lunch reservation at the island’s local eatery, located near the ferry port. All I can say is this was a taste sensation and I had some of the best seafood I have ever eaten anywhere; not to mention the views from the table!  The staff were also outstanding, all locals who were never too busy to discuss the island and its rich history. 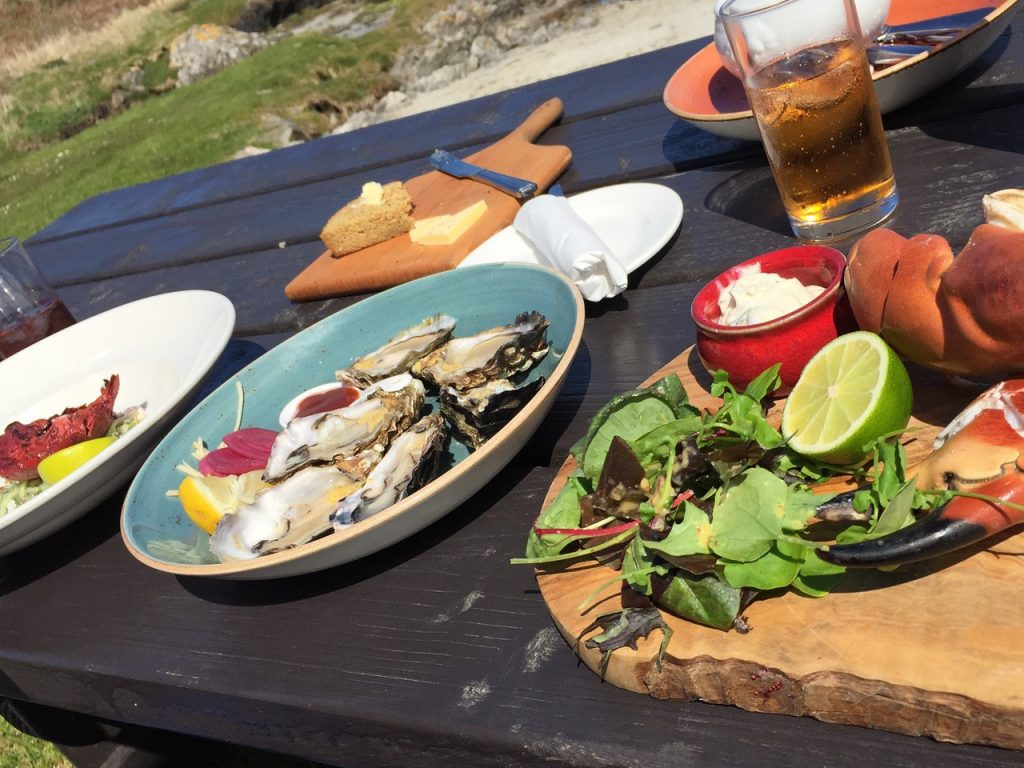 After my lunch I dropped the car off and went exploring on foot, discovering the local church and golf course. Gigha is a quaint island – the locals are very welcoming and I am very much looking forward to returning.

The next day I was up early to set sail for the Kintyre penninsulaon the first ferry of the day, and quickly found myself heading back north towards Inverary. Here I stopped for a coffee and fresh croissant in one of the many cafes. The town even in the early hours is alive and bustling with visitors! I found myself at the castle and spent some time there taking in the scenery.  My next stop was Loch Fyne where I treated myself to some oysters and chowder at the loch front. I even had time to drop into the local Loch Fyne brewery to buy some craft beer samples to enjoy that evening after getting home.

The weather stayed perfect the whole way back to Glasgow as I ended my trip. The island was beautiful, peaceful and the ideal getaway from the city living. Gigha is definitely a perfect place to relax and unwind! 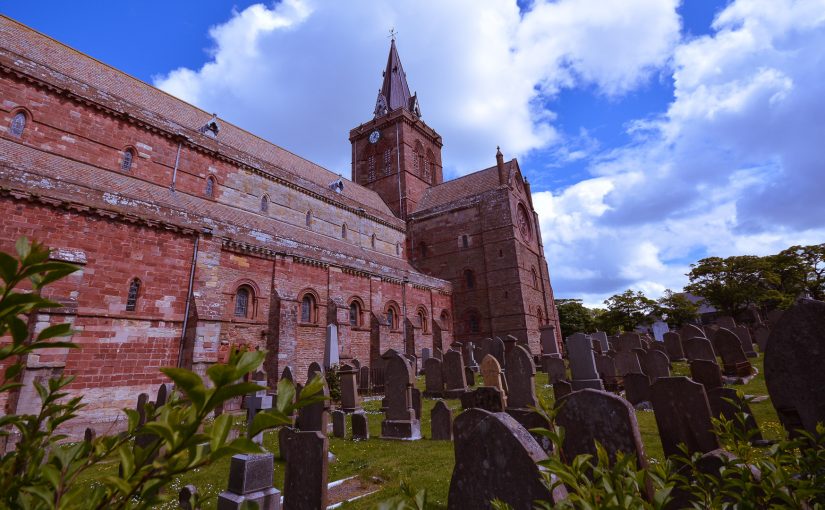 Last month I was in Orkney for the first time. I have never been that far north before. I flew from Glasgow to Kirkwall, the main town, instead of taking the ferry. The weather was gorgeous and we could see all the islands – turquoise water and empty lands…I was already loving it! As a non-driver, I want to share some recommendations of what to see and do. You don’t need a car to explore Orkney and see the main sites.

Kirkwall is a great base with very nice hotels in town, giving you the opportunity to walk everywhere. Go to the pub and try one the island’s famous whiskies – Highland Park or Scapa. Explore St. Magnus Cathedral, located on the main street. Known as the ‘Light of the North’, it is one of Orkney’s Viking splendours and definitely worth a visit. Staying in Kirkwall makes it also very easy to visit other islands. Did you know that Orkney has more than 70 of them? From Kirkwall ferry port you can go to all the northern isles, for example Shapinsay, Westray and Papa Westray.

If you have time, I advise going to the isle of Rousay for a day trip, taking the ferry from Tingwall. The visibility was so good that we could see all the other islands around us – even Westray! I discovered from the local guide that Rousay is called the Egypt of the North because of so many neolithic remains, such as Midhowe, with its broch and cairn.

No trip to Orkney is complete without at least a visit to Skara Brae and the Ring of Brodgar, both are listed as world heritage sites. At Skara Brae, you can imagine how ancient people were living… and also walk down to the nearby sandy beach. The Ring of Brodgar was for me a completely different experience. A circle of standing stones? I’ve never been interested in such sites, but as it’s one of the most famous and iconic symbols of Orkney’s prehistoric past, I thought it would be a shame not to see it. OK, I take back everything I said! It is a very impressive and spectacular structure!

A trip to Orkney is a truly remarkable experience, when you can feel the history and find something unique around every corner. 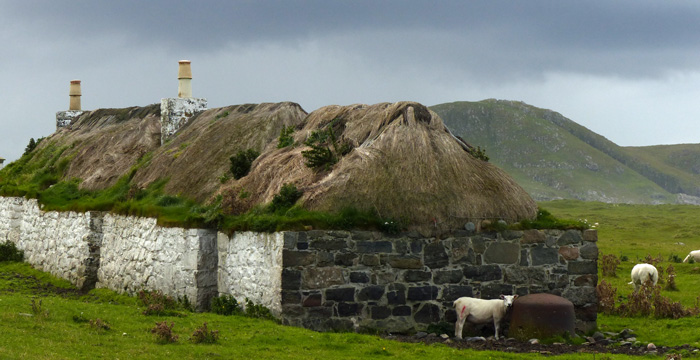 Heather McKinlay in search of family roots and food on the Hebridean island of Tiree.

It’s a strange feeling when you have never been somewhere before, but you know a part of you is “from” there: my great, great grandfather was born on Tiree in 1810.

The plane from Glasgow was delayed somewhat – low cloud over the island meant it was after three when we first set foot.  So the search was on for a late lunch.  We suspected this might be challenging here on this most westerly of windswept outposts.

The hotel in Scarinish had stopped serving at 2.30pm.  The enticing Sam’s Seafood Van across the road claimed to offer all day fare, but the shutters were resolutely pulled down.  We headed back out of town, following signs to “Chocolate and Charms”.  We arrived at a very quaint shop, crammed with colourful crafts and shiny silver jewellery plus copious chocolate.  Coffee and cakes were on offer too, but I have a rather savoury tooth, so the hunt continued. A little further on, the Farmhouse Café promised Mon to Sat opening.  It was just 4pm as we pulled alongside, only to see the “closed” sign flapping on the door, while the last, lucky customers hastened out of the side entrance.

The hunger pangs were worsening, so I tore into the recently purchased bar of chocolate to ease my mood while we meandered along the single track roads back to the main town.  Nothing for it but to settle for the lunch of last resort – a savoury pastry, bottle of water and some raspberries straight out of the Scarinish Co-Op.

Tiree is famed as the windiest corner of the UK, attracting surfers of all persuasions.  It also has an enviable sunshine record: often the rain and clouds simply blow-in off the Atlantic and straight over the top of this low-lying land mass.  Today, however, the clouds were hanging about.  Even through the grey and the spray, the place had an alluring aura, and a strong sense of community.  Maybe my Tirisdeach (“from Tiree”) roots were influencing me somewhat?  Or perhaps I was just happier now I had eaten!

I’d made an appointment to meet Duncan, the volunteer genealogist at An Iodhlann, the historical centre.  Here I heard fascinating stories of how Tiree people had spread far and wide, though many just to Glasgow.  We browsed island records both on and offline in search of McFarlanes and MacArthurs (my paternal grandmother’s line), while learning about the island’s social history.

It is unfathomable to compare my upbringing and comfortable modern-day lifestyle with that of my Scottish family going back just a generation or two.  My great, great grandfather left Tiree at some point in the first half of the 19th century – perhaps because of the potato famine, perhaps on the promise of work elsewhere within the Duke of Argyll’s lands, perhaps because he met and fell in love with a visitor – now I’m almost certainly over-romanticising. The census of 1851 shows him in Campbeltown, Kintyre, working as a “drainer” laying clay pipes.

McFarlanes and MacArthurs are still found on Tiree, so I may have been brushing shoulders with distant cousins.  Just as we were leaving the historical centre, I spotted a picture of D&A MacArthur’s Stores – once the main general store in Scarinish.  I read that it burnt down several decades ago, to be replaced on the same site by, you’ve guessed it, the Co-Op.

Maybe my lunch venue of last resort was just meant to be.